The retired football icon David Beckham turned the morning of a paramedic into a great one as he gave coffee for her and tea for her patient when both of them were waiting in the cold for an ambulance to arrive, proving once again that as well as being a great footballer, he is a great man.

Catherine Maynard is a London paramedic who was treating a patient a few days ago in Monday morning and as she waited for her ride to arrive, she stated that Beckham arrived and helped them out. 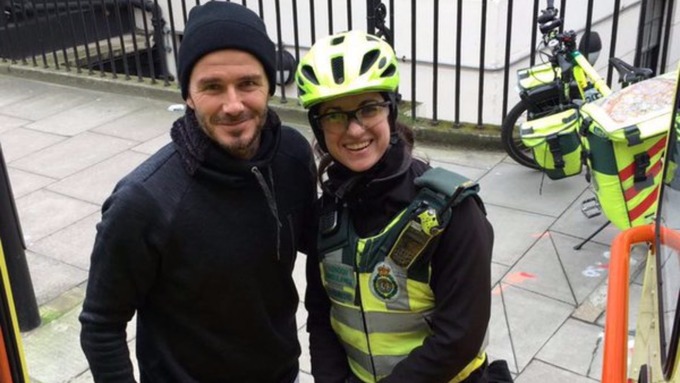 The main obstacle that David Beckham has been trying to solve in regards to his plans of making an expansion team in Miami, has been where to establish and construct his stadium. A few months ago, David Beckham and his group of investors saw their bid failing in relation to having a stadium being built next to Marlins Park.

David Beckham is a football figure who is not only known for what he has accomplished inside the pitch but also outside of it as well.

The Englishman is considered to be one of the best set-piece takers in the history of the sport and in every club that he performed in; he was one of the main players who had to step up whenever a penalty or free-kick was given to his respective team.

David Beckham has shockingly revealed that he enjoys watching rugby more than football. The former England star is regarded as one of the icons of the game. Beckham is known for his freekick taking abilities, while he has achieved so much in the sport while playing for top teams like Manchester United and Real Madrid. Beckham is one of the few players to have played in three major leagues with three top teams – Madrid, United, and AC Milan. His sons, though, have been showing different interests of late. They have also started supporting the likes of Arsenal whereas Beckham is known to be a huge fan of United.

David Beckham and Sir Alex Ferguson widely fell out with each other almost a decade ago. The former England international, though, has praised his manager ahead of a fundraising game at Old Trafford.

Beckham and Ferguson reportedly came to blows before the former joined Real Madrid for £ 25 million. Despite being one of the best players in the history of the club, Ferguson did not think twice about selling him to one of the main European rivals. Beckham has pushed aside all the hard feelings that he may have about the Scot, who recently retired from management.

It is easy to forget that for the best part of his career, David Beckham did not don the number seven jersey.
It was not his to start with at Manchester United, with the young floppy-haired winger graduating out the Old Trafford academy system working his way steadily down the order from 28, to 24 and then to number 10.

Teddy Sheringham has now revealed that the tale of one of English football’s most iconic figures could have been markedly different had he not joined the Red Devils in the summer of 1997, with his standing as an elder statesman and out-and-out frontman allowing him to cherry pick his squad number of choice. Having opted for 10, Beckham was offered the opportunity to take seven.

David Beckham has revealed that his eldest son, Brooklyn Beckham, will not be pursuing a career in football.

Instead, he will focus on his other interests. Brooklyn was seen as the next David Beckham and it appears to have been the primary cause behind the youngster opting out of football as a career. Beckham has a huge reputation in the game and the former Manchester United superstar reveals that Brooklyn was not sure about having to live up with the comparisons throughout his career. If his career did not turn out as expected, he would have faced numerous criticisms about failure to reach his dad’s level.

Former England international David Beckham is one of those several calling for a change at FIFA.

The world football governing body has been hit by a number of corruption scandals in recent years. The most high-profile of them has happened just days before Sepp Blatter was re-elected for the post once again. The Swiss has held this position since 1998. He promised during the previous elections that it would be his last term as the FIFA president, but it has not been the case. He managed to beat his only opponent narrowly to secure another term.

David Beckham has branded former Manchester United captain Roy Keane as the best midfielder he has ever played with.

This is an extraordinary accolade for Keane, whose character has been questioned on numerous occasions.Keane was a central figure in the United team that won the treble in 1999. Yet, he was forced to leave the club in acrimonious circumstances after falling out with manager Sir Alex Ferguson. His exit was in many ways similar to the departure of Beckham a few years ago. Beckham has played with top midfielders like Zinedine Zidane and Ronaldinho during his time at Real Madrid and AC Milan respectively.

David Beckham knows a thing or two about what it takes and how the international scene in football works as the former player captained England for 6 years where he went off to make over 50 appearances as the captain of the national side.

The former Manchester United player has given his thoughts about Harry Kane.

Harry Kane is attracting the attention of everywhere all over the globe as the 21 year old forward is the top goal-scorer of Tottenham Hotspur after having scored 16 goals in 24 league appearances.